Originally published by UCLA Newsroom As UCLA undergraduate Jendalyn Coulter spoke to the several dozen professors, students and educational leaders about her research on former foster youth who go on to college, she was poised and commanded the room. The fourth-year sociology major and education minor, who is herself a former foster youth, was presenting […]

Originally published by UCLA Newsroom Karida Brown, UCLA assistant sociology professor, was inspired to create a support network for academics of social change last year when she realized how many of her contemporaries, herself included, would consider themselves a combination of scholar, organizer and activist — just like NAACP co-founder and scholar W.E.B. Du Bois. […]

Originally published by UCLA Newsroom On a sunny autumn Saturday at the Southeast-Rio Vista YMCA in the city of Maywood, kids colored drawings and played Jenga while their parents and other family members underwent basic health screenings conducted by volunteer nurses. After their bloodwork and other tests were done, the people met with doctors from […]

Disabled dancers learn to redefine the aesthetics of movement at UCLA

Originally published by UCLA Newsroom As the 10 dancers moved across the studio floor in Kaufman Hall, their instructor closely watched how each dancer’s body movements transitioned from one to the next. Victoria Marks, associate dean of the UCLA School of the Arts and Architecture and professor of choreography, offered encouragement and challenged the dancers […]

Originally published by UCLA Newsroom Judy Mark was observing her students working in their four-person groups in her Autism Media Lab when she noticed one group quietly working on their laptops. No one was talking with each other. Frustrated, she went over and asked them why they weren’t working together or even engaging with Gaby […]

Originally published by UCLA College In a roundtable discussion with UCLA students and Chicago entrepreneurs at Startup UCLA on Feb. 12, Chicago Mayor Rahm Emanuel was adamant that despite all his career accomplishments, it is his failures, not his successes, that continue to teach him his biggest lessons. For the students in the room, it […]

(Originally published by USC Shoah Foundation) Documentary filmmaker J. Michael Hagopian didn’t have to look too far for survivors of the Armenian Genocide. Somehow, says his wife Toni Hagopian, they always found him. “The first time I experienced it, we were in New York on our honeymoon and there was a note left in the […]

Originally published by USC Shoah Foundation He was under five years old at the time, but World War II left an indelible mark on Louis Schmidt. He’s never forgotten the air raid drills, seeing his uncles in military uniform, or looking at pictures of prisoners of war in Life magazine. So when Steven Spielberg announced after he […] 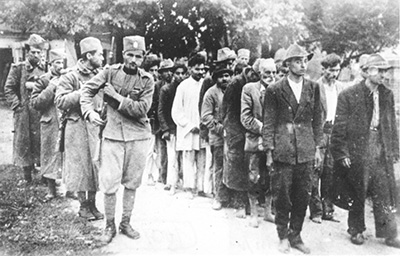 The History and Significance of August 2, Roma Holocaust Memorial Day

Originally published by USC Shoah Foundation On August 2, 1944, nearly 3,000 Roma and Sinti women, men and children were murdered in the gas chambers of Auschwitz-Birkenau. Seventy-one years later, the date was formally declared “Roma Holocaust Memorial Day” under European law, and the need for continued memorialization of the fate of the Roma and […]