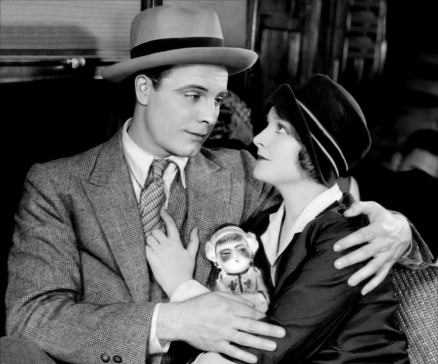 King Vidor’s The Crowd is a film of such warmth, such all-American joy and good humor, that when it finally decides to get serious, it delivers one of the biggest imaginable sucker-punches of silent cinema.

Thank God for that, because it turns what at first threatens to be one of the happiest and most pointless movies ever made into a dark yet honest commentary on the American dream, featuring a couple that could inspire affection in even the most jaded moviegoer. The film’s legacy is, of course, that ending – a final shot so brilliantly ambiguous that it could be debated anew with each viewing.

Twelve-year-old John Sims, born on the Fourth of July, 1900, is riding high with the confidence that he’ll be “somebody big” when he grows up when his father dies. Nine years later, he arrives in New York City (played by James Murray), still confident but now an anonymous worker bee in a nondescript skyscraper. On a blind double date to the carnival, he falls in love with the lovely and energetic Mary (Eleanor Boardman). Soon the two are married and experiencing the highs and lows of renting their first apartment, having children, and struggling to survive on John’s paycheck, which never seems to increase despite John’s motto that soon his “ship will come in” and he’ll be a great success.

Thus unwinds a long stretch of happy event after happy event, delivered with charm and poignant honesty. John and Mary go to Niagara Falls for their honeymoon and kiss on a mountainside, professing their love for each other. They take their first train trip as a couple and experience the sweet awkwardness of two people learning to live together for the first time. They have their first fight, and neither is all right nor all wrong.

John’s difficulty moving up in the world simmers under the surface of every major event in the Sims’ lives, but for the majority of the film it is never more than an intermittent source of conflict. Their marriage is, for the most part, a happy one – and “for the most part” is key. Mary is a loyal and loving wife, quick to relent her criticisms of John whenever he does something charming, like play with their two children on the beach or tell her she’s the most beautiful girl in the world. John can be impatient and unreliable, but he has good intentions and loves his family. Their marriage as portrayed in the film is as convincing and realistic as any movie marriage could be; it’s not perfect, but it’s not melodramatic, either. Both Mary and John get frustrated with each other, but they make up quickly and soldier on. It is a joy to watch them on their journey and impossible to not wish desperately that they’ll end up getting everything they want.

If this were all the film was, however, we might have ended up scratching our heads, wondering why anyone wanted to make a movie about these very nice but relatively unexciting people. But more than halfway through the film, the storm hits. Tragedy is followed by the unraveling of John’s already tenuous career and the end of Mary’s patience for her husband’s shortcomings. And yet, the film never succumbs to anything less than absolute realism. The Sims must suffer through the most traumatic event of their lives, but eventually they move on, or try their hardest to. It is exactly how one might imagine a young couple would respond to such heartbreak. The film also creates a satisfying full-circle moment when one of John’s new jobs recalls a conversation he and Mary had when they first met and signifies – at long last – his growth as a character.

Some may be disheartened by the film’s final moments and suggested resolution and others may be uplifted by it. The filmmakers have clearly deliberately chosen to leave their message up for interpretation. Whether or not John and Mary “make it” in the end depends on each viewer’s definition of the American dream, and for a film that starts out so delightfully optimistic, it’s disarming that so much is left unsaid. But it’s a choice that pays off. The Crowd packs such an emotional punch, it implores us to keep asking the questions it raises – even if we never know the answers.