The trouble with Glee 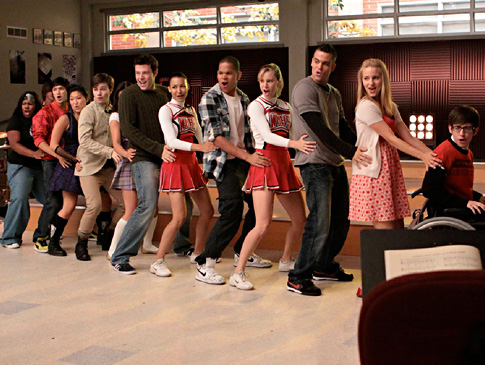 When promos started airing in 2008 for a new show called Glee, about the so-called misfits that made up a high school glee club, I rolled my eyes. It looked silly, a little too earnest, and “Don’t Stop Believin'” has never been one of my favorite songs. I didn’t watch and tried to ignore the growing hysteria over the first season.

Cut to three seasons later, and I’m a bona-fide Glee fan who never misses an episode and has a dozen songs from the show on her iPod.

The novelty of the show and the occasional brilliance of some of the musical numbers in the first two seasons (“Happy Days Are Here Again/Get Happy,” “Baby It’s Cold Outside,” “Teenage Dream”)kept me satisfied even when the plot left me shaking my head. I could have cared less about the Rachel/Finn/Quinn love triangle, and Coach Sue often came too close to being cartoonish – but these were small gripes in a show for which I was already perfectly happy to suspend my disbelief every time the “loser” New Directions belted out a perfectly choreographed musical number in an auditorium decked out like a Broadway theater. I succumbed to Glee‘s ridiculously improbable world and embraced it wholeheartedly.

But lately I find myself, well, rolling my eyes again. But why? The plot isn’t necessarily any more silly than it was the first two seasons, and the musical numbers are still fantastically entertaining. There have been tons of great celeb guest stars and new cast members have been added to the glee club. On the surface, Glee would seem to be better and buzzier than ever.

The problem is this: the writers and creators of Glee have taken shortcuts with its plot and character development since day one, and it’s finally catching up to them.

They’ve wasted entire episodes on a specific “theme,” like the Rocky Horror Picture Show, Madonna and Christmas episodes. They’ve devoted half or entire episodes to a guest star who will never be seen again, or at least not for a long time (Kristen Chenoweth, Gwyneth Paltrow). They’ve added more and more characters when they already didn’t have enough time to devote to the core group they started with.

Most importantly, they’ve let the hype surrounding the music come before the story.

In the recent Michael Jackson tribute episode, there were 9 songs. 9! In a 42-minute episode! That comes out to a song every 5 minutes, and in fact there really were only a few minutes of dialogue before one character or another broke out into yet another song. With a packed schedule like that, it’s no wonder that particular episode took 42 minutes to advance only 4 important plot points (Rachel and Finn got engaged, Rachel and Kurt are finalists for NYADA, Blaine hurt his eye being slushied by Sebastian, and the New Directions aren’t going to do Michael Jackson at regionals). These are not complex plot points; in any other hour-long drama these events would be sorted out in about 10 minutes.

What happened to complex drama or real intrigue? Characters unique and exciting but so lifelike you feel they might actually exist? I’m not saying every show has to be as complicated or original as Boardwalk Empire or The Wire, but even Desperate Housewives had more going on in a typical episode than Glee does on its best day. Glee‘s plot points are constantly forgotten for episodes at a time, abandoned altogether, or brushed aside in favor of a shiny new song or “shocker” that’s shock value has about as much substance as cotton candy.

If Glee wants to keep me as a viewer, it’s got to make some major changes. Don’t add any more regular characters. Only a couple guest stars per season. No more than four or five songs per episode. And for God’s sake, plan ahead more than three episodes at a time! Let us get caught up in the drama of the characters and their lives, not the song choices or headline-grabbing conceits. And if you still think you don’t have enough material to fill 42 minutes each week, scrap the characters that have nothing going for them (Tina, Rory, Sam) and devote that time to existing characters or replace them with characters so interesting and full of life we can’t take our eyes off them.

I’m willing to hang in there a little longer because when Glee is good, it’s truly great. The writers and creators just need to rediscover what made them want to make this show in the first place. And watch The Wire while taking notes. Vigorously.