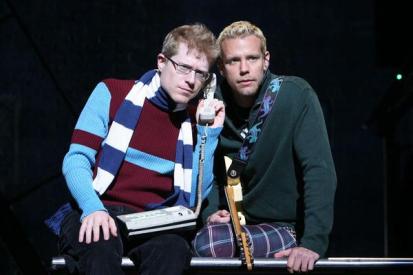 The lights haven’t even dimmed in the theater yet as Adam Pascal strides onto the stage, toting a guitar. He sits down and begins to strum quietly, with only an amp, table, a few chairs, and a towering set piece made out of scrap metal for company.

Not a soul in the sold-out crowd at the Curran Theater is experiencing Rent for the first time today. That much is clear by the decibel of screaming and cheering not after each rock-anthem musical number but before – not for each character at curtain call but when each one appears onstage for the first time. This may be the closest a Broadway show can possibly come to feeling like a Beatles concert.

We’re here for two reasons: Pascal and Anthony Rapp, the original Roger and Mark, the faces of Jonathan Larson’s beloved New York City bohemian musical ever since its Broadway premiere in April 1996. Both left the Broadway company long ago, but they’ve joined a new national tour of the show, stopping in over a dozen cities for less than two weeks in each one. It’s not the first time Pascal and Rapp have reprised their roles since their original runs on Broadway, but they say it’ll be their last.

But don’t tell this crowd. Their nonstop, raucous enthusiasm at watching Rent performed by its two biggest stars 13 years on gives today’s performance – a Saturday matinee, of all things – an sense of exhilaration and just a bit of Broadway magic.

We know the story by heart. It’s Christmas Eve, 1989. Mark, a filmmaker, and Roger, a musician, are roommates in a Lower East Side loft that has had the unfortunate luck of having its power shut off because the guys are behind on their rent. They’ve got a beautiful, drug-addicted S&M dancer neighbor named Mimi and another friend named Tom Collins, who’s helped after a mugging by Angel, a gentle-souled transvestite. Oh, and there’s Maureen, Mark’s free-spirited, activist ex-girlfriend who’s just dumped him for a lawyer named Joanne.

Their problems over the next year, in a nutshell: The gang’s former friend Benny has married the wealthy daughter of a businessman who wants to build a digital studio/loft development in the middle of the homeless people’s tent city. Roger struggles to write a song and begin a relationship with Mimi because his last girlfriend committed suicide. Angel and Collins fall in love, Maureen and Joanne get engaged but Maureen’s nonstop flirting with other people causes a rift, and Mark tries to make his first film without selling out. Above them all looms the specter of AIDS and HIV – Roger, Mimi, Collins and Angel are all living with various stages of the disease.

The story is told mostly through song, with very little dialogue. Listening to all the songs in order, one right after another, can be an overwhelming experience for the uninitiated. It’s rock ballad after rock anthem for two and a half hours straight, from the opening battle cry “Rent” featuring the whole company yelling about the miseries of being broke artists in New York to Roger and Mark’s signature, angst-y duet “What You Own.” Angel’s cheeky, rap-infused number “Today 4 U” is a particular crowd pleaser, as he (she) bounces around the stage in full drag.

The showstoppers are “La Vie Boheme,” which sees the company dancing on tabletops while expounding the bohemian lifestyle, and “Seasons of Love,” one of the show’s simplest numbers but also its purest, as the cast stands side-by-side onstage and sings, in soaring harmony, those now-immortal words: “Five hundred twenty five thousand six hundred minutes / How do you measure, measure a year?”

Thirteen years after its debut, Rent has, admittedly, begun to show its age. What must have been edgy in the ‘90s now feels just average. More recent shows with R-rated content like Spring Awakening, Avenue Q and The Book of Mormon make Rent’s treatment of sex, drugs and homosexuality feel a little quaint. In order to appreciate its story and the characters’ struggles, today’s audience must view it through the lens of the time in which it was written, because today such a show simply wouldn’t exist.

But die-hard fans don’t need to be told how special this performance is. Rapp and Pascal look a little old to still be playing Mark and Roger but their voices haven’t changed a lick. Both possess the rare ability to sing in a combined theater/rock style, and they belt each song flawlessly as though they’ll never sing it again. The rest of the cast is good. Hopefully they’re not offended that no one’s here to see them – Rapp and Pascal can’t exactly do the show by themselves, after all.

Most, if not all, here today never got the chance to see Rent in its heyday on Broadway. For many Rent geeks, it’s probably their biggest regret. But this performance is more than a consolation prize. It’s a gift for the fans, a slice of theater history that has been brought to life in the small way that it can. Watching two original cast members perform the songs they’re famous for with hundreds of fellow fans, knowing that such an opportunity may never come around again, is enough to sustain these Broadway babies for years to come.

As the opening chords blare and Pascal is joined onstage by Rapp and the rest of the company to sing, angrily, “How we gonna pay / Last year’s rent!” you may be tempted to close your eyes and just listen. Is this one of Rent’s 5,124 performances at the Nederlander Theater on Broadway? Nah. But it’s close enough.

← Memo to Rex Reed, The New York Observer
A Peter Pan for Grown-Ups →