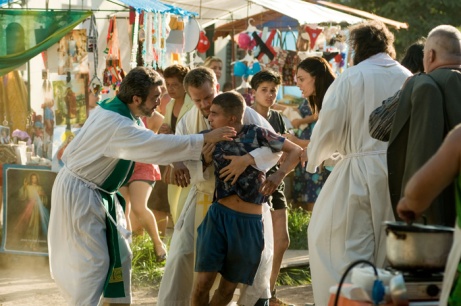 (Originally published in the Houston Press)

Director Pablo Trapero brings the slums of Buenos Aires vividly to life in White Elephant (Elefante Blanco), a meditative, beautifully photographed, remarkably intimate film despite the vast helplessness contained inside it. Julián, a priest in a shantytown called “Villa Virgin,” recruits his friend and fellow priest Nicolás to join him in his work, which currently includes keeping the slum’s drug wars at bay and fighting bureaucracy to complete the construction of a new hospital. But Julián hasn’t told anyone of his life-threatening illness, and Nicolás is questioning his faith after surviving a tragedy in the Amazon. A social worker named Luciana complicates matters further when Nicolás finds himself falling for her and he is forced to choose between his religious calling and his newfound love. Though Julián, Nicolás and Luciana have placed the burden of life in the slum on their shoulders, Trapero wisely refrains from turning them into saints, instead depicting the toll their often thankless work has on them in spite of their good intentions. Local extras and the sea of tin shacks make the line between cinema and reality hazy. There aren’t many answers given here to the issues of poverty, faith, and politics the film raises, but White Elephant at least gets us to ask the questions by capturing a complex, fully-realized world.

← Free China: The Courage to Believe (2013)
An American Journey with BOB →