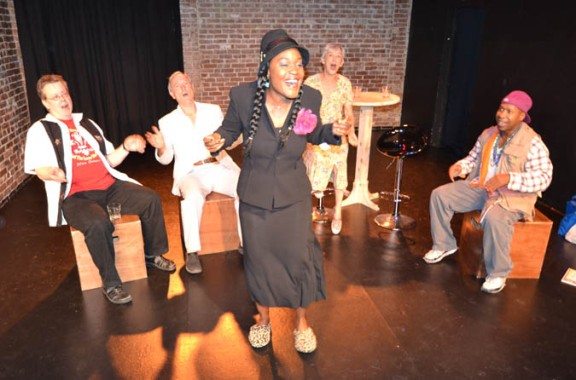 Think of Hurricane Katrina, and the images that probably come to mind are wind and rain pounding the flooding streets of New Orleans, people standing on rooftops waiting to be rescued, or the cleanup process that dragged on for years.

But according to The Katrina Comedy Fest, tales of destruction, chaos and suffering are not the only ones to emerge from the storm. The play tells the true stories of five individuals who survived Hurricane Katrina in New Orleans, and through each person’s resilience and positive outlook, the tragedy itself gets a decidedly more uplifting spin.

The Katrina Comedy Fest premiered at the New York International Fringe Festival in 2010 — it was one of four non-musical plays cited for overall excellence by a panel of Fringe judges. It makes its West Coast debut at the Lounge Theatre as part of the Hollywood Fringe Festival through June 30.

Playwright Rob Florence is a longtime New Orleans resident and historian. He owns and operates Historic New Orleans Tours, has authored several nonfiction books about New Orleans and teaches playwriting at University of New Orleans and Tulane University. His next play, Holy Wars, will be produced at theBayou Treme Center.

Florence, director Misty Carlisle and five of the six cast members have gathered at theCat & Fiddle restaurant — which Carlisle chose because its outdoor patio reminds her of New Orleans’s French Quarter — to discuss the play and its themes.

Florence says he didn’t want to write about Hurricane Katrina for a long time because the experience was so traumatizing, but he began to take issue with the kinds of stories the mainstream media were reporting about how the people of New Orleans had weathered the storm and its aftermath. He says too many of the stories were negative, focusing on crime and painting residents as partly to blame for the trouble the city faced.

In fact, Florence’s early versions of the play took a similarly dark tone. But he wasn’t happy about it.

“Initially some monologues were really brutal,” Florence says. “That wasn’t an accomplishment because you swing a dead cat in New Orleans and you hit 45,000 really depressing Katrina stories. That’s easy. What was surprising were these triumphant, funny stories, like situational comedy.”

Deidrie Henry plays Antoinette K-Doe (alternating performances with Peggy Blow), wife of legendary New Orleans blues musician Ernie K-Doe and the owner of the Mother-in-Law Lounge, a haven for New Orleans musicians. Antoinette (who died in 2009) sheltered her neighbors and granddaughter during the storm on the second floor of her establishment. Florence calls her “a living surrealist” who “doesn’t ask you to do stuff, she tells you.”

Henry says she was attracted to The Katrina Comedy Fest’s concentration on people’s kindness and courage during the storm, which were generally obscured in media coverage. Like Florence, she had never heard such inspirational stories from Katrina.

“I’d never heard of the kindness. Just the length of time and the steps people took and how quick the water rose and where they were and how they got out,” she says. “I wanted to get into this woman’s body, and I wanted to get into her mind and experience that whole adventure with her.”

Judy Jean Berns plays Judy, a “strait-laced” woman with pet ferrets who becomes fast friends with a group of tattooed, pierced kids, “who she never would have had anything to do with before,” Berns says. Travis Michael Holder describes his character Rodney as the play’s comedic relief. While trying to get his elderly parents to safety, Rodney grows increasingly aggravated by his cranky mother. He’s got a “Mario Cantone vibe” about him, Holder says, and the real “Rodney” actually spoke one of Holder’s monologues in the play.

Jan Munroe describes his character Sonny as a take-charge kind of guy, who always comes up with a plan of action and marches forward even through adversity. “He seems to be very practical, in the moment, unfazed,” Munroe says. “I don’t even think he’s horrified by this. He’s taking it in stride as part of what is happening to him.”

L. Trey Wilson’s character Raymond, an artist who lives predominantly on the street, doesn’t just take the storm in stride — he actually views Hurricane Katrina as a positive event in his life because he gets to travel and have an adventure.

Wilson says he believes that art heals, whether the tragedy in question happened yesterday or nearly 10 years later. The Katrina Comedy Festoffers a chance at healing from Katrina even if the memories are still painful, he says.

“To have someone witness it and tell your story as a way of healing, whether it may be what you felt or what someone else felt, it makes you feel like you’re not as alone,” he says.

And while there’s still a sense of outrage in America about what happened, in the play, Munroe points out, “there’s very little outrage, which makes it interesting.”

“These five people didn’t have time to be outraged. They were living it,” Carlisle adds. “Today everything is built on conflict and sensationalism, so it’s nice to finally be a part of something where it is inspirational and people do survive. They’re not negative about it, they’re not bitter about it, and they all still live there and they all still love their home.”

Florence and the cast hope theater companies keep The Katrina Comedy Fest in mind and perhaps stage it in honor of Katrina’s 10th anniversary in 2015. But even if it’s not produced again, the play already seems to have had an impact.

Holder, who teaches acting at the New York Film Academy’s Los Angeles campus, says he brought his students to see the play’s first preview. Echoing a sentiment probably shared by many who remember watching television coverage of Katrina almost eight years ago, one student from Brazil said she had never seen this side of the storm.

“She said, ‘I never heard these personal stories, I never had a personal connection to it. I think of Katrina and I think of people on the roofs, people in the water, but this is the first time I’ve put human faces to it,’” Holder says. “I think that’s really valuable.”

**All The Katrina Comedy Fest production photos by Rob Florence.