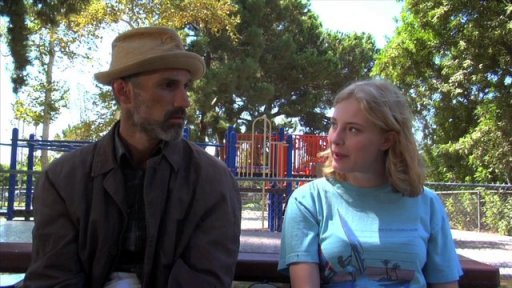 A teenager tries to connect with her amnesiac, homeless father in this underwhelming little film entirely ill-equipped to deal with its serious and important themes. Seventeen-year-old Amy (Jenny Leona di Gennaro) has just been dumped by her boyfriend, who is also her teacher and twice her age, and is struggling to pay rent on her apartment (she doesn’t live with her mom, a psychic named Norma, for reasons that are never sufficiently explained). Amy embarks on a quest, seeking the father she hasn’t seen since she was a baby, a Gulf War veteran named Bill (writer-director Karl Lentini). When she finds him, he is collecting cans in the park, barely verbal, and doesn’t remember her. It’s up to Amy to help Bill and get him to be just a fraction of the father she’s never had. In more capable hands, Cleaver’s Destiny may have been a powerful film, but its portrayals of the homeless and mental illness are troublingly naïve. Watching Amy bring Bill to her apartment and try to take care of him is uncomfortable– does no one realize how staggeringly irresponsible, not to mention dangerous, this would actually be? A general lack of clarity in the storytelling doesn’t help– small but important details like why, exactly, one homeless guy has it out for Bill tend to fall by the wayside–and the ending relies on the erroneous belief that death automatically makes stories profound. It’s a suitably frustrating conclusion to a film that, with such worthy subject matter, deserves better.

← A Strange Brand of Happy (2013)
Impact in Profile: Lyndell Higgins →