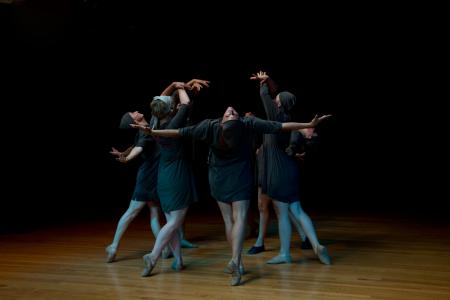 “I Have Lived A Thousand Years.” Credit Lyndell Higgins

Lyndell Higgins wanted to teach people about the Holocaust. So, she started to dance.

Higgins is the founding director of the Los Angeles-based Stretch Dance Company, which she created in 2010.  The company recently debuted its first full-length dance production, I Have Lived A Thousand Years, based on the popular memoir of Holocaust survivor Dr. Livia Bitton-Jackson. Bitton-Jackson’s testimony is in USC Shoah Foundation’s Visual History Archive.

Higgins said she’s always been interested in the Holocaust, partly because of her family history (her grandfather fought in World War II and her grandmother was the only one in the family who maintained her Jewish faith at the time), and partly because of her empathetic nature. For Stretch Dance Company’s first full production, Higgins turned immediately to the subject.

She embarked on a quest to find the perfect Holocaust memoir to bring to life through dance, and found it in Bitton-Jackson’s I Have Lived A Thousand Years: Growing Up in the Holocaust (1999).

Bitton-Jackson, born Elli Friedmann in Czechoslovakia, was sent to Auschwitz with her mother and brother during the Holocaust. All three survived (her father was separated from the family and killed), and Bitton-Jackson became a professor of history at City University of New York. Today she lives in Israel.

Her memoir fit the bill for Higgins’ production because its reading level is appropriate for middle- and high school students, the book is still in print, and it features a teenager that young people can identify with. The show is intended to be accessible to young audiences, and Higgins hopes to travel to local schools to put on performances.

In addition, Higgins jumped at the chance to tell the story of a female survivor. As a docent at the Museum of Tolerance in Los Angeles, she says she’s noticed that the students on her tours are often surprised to find out that women were imprisoned in concentration camps alongside men. To describe the Holocaust from a female perspective “opens their minds up to the horror of what it actually meant,” she says.

I Have Lived A Thousand Years also contains one key ingredient: the power to inspire.

“Her memoir is so filled with hope the entire time. That was what really pushed me,” Higgins said.

Bitton-Jackson herself donated the rights to her book and offered invaluable advice that informed the historical accuracy of the production, Higgins said.

Stretch Dance Company’s production I Have Lived A Thousand Years depicts the harrowing events in Bitton-Jackson’s memoir, from her happy teenage life before the war to her arrival at Auschwitz on a cattle car and her eventual liberation, completely through dance, sets, costumes and an original score – no dialogue.

Higgins said chapters about starvation and thirst, which she and her dancers have never experienced, were the most challenging to choreograph.

Higgins invited local museum staff, teachers, principals and theater directors to watch the show and asked them to fill out surveys afterward. She said they were surprised by how easily they could follow the story without dialogue, and everyone reported feeling a more emotional connection to that period of history and to other people after watching the show.

When the company performs in schools, Higgins will work with teachers to develop supplementary activities, such as having students read the memoir in class or talk to the dancers after the show. Grants, including one from Disney, will lessen the cost for schools.

Though it’s not often used to tell stories from the Holocaust, dance can be a powerful way to engross people in such experiences, Higgins said.

“Dance has the ability to convey universal emotion. When you take words out of the equation you’re left with how you feel,” Higgins said. “Since that was my main purpose, to make people feel and make people have empathy, dance is the perfect tool to do that.”